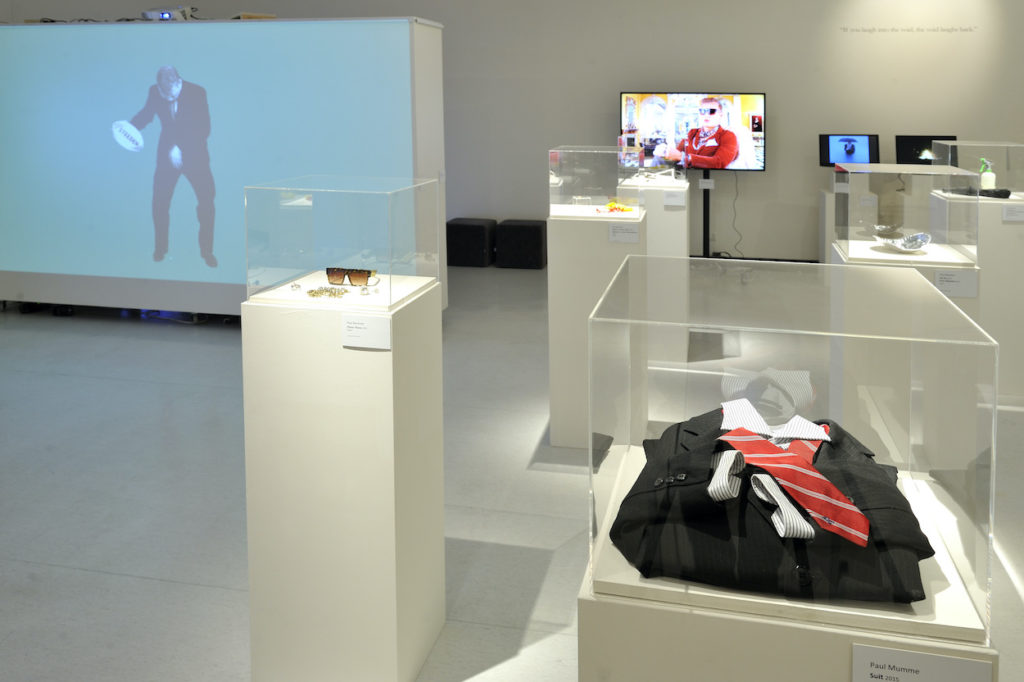 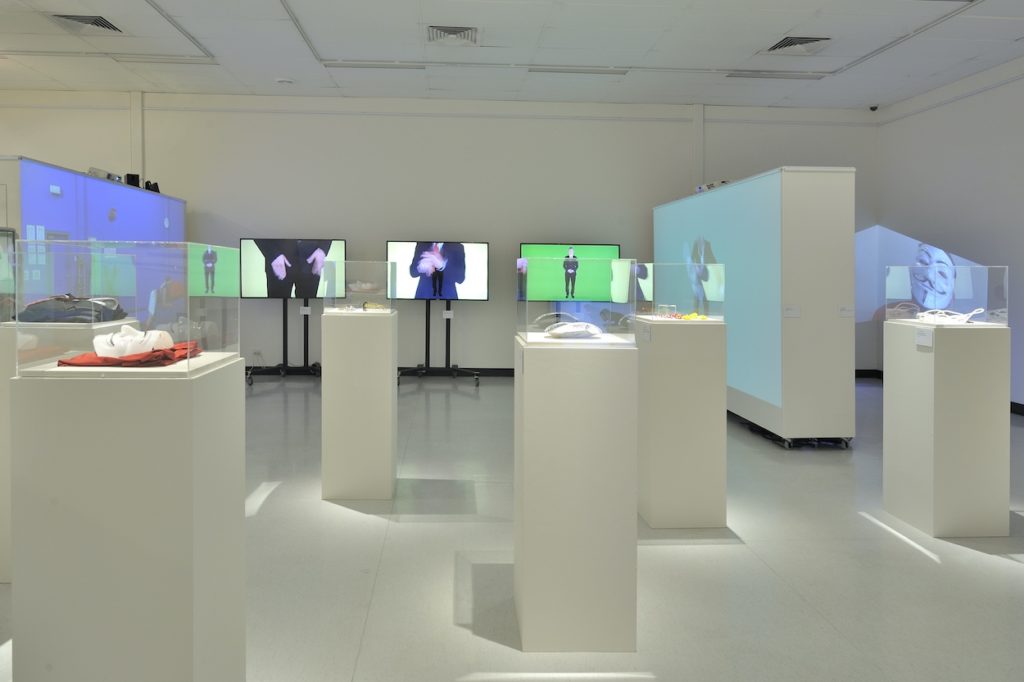 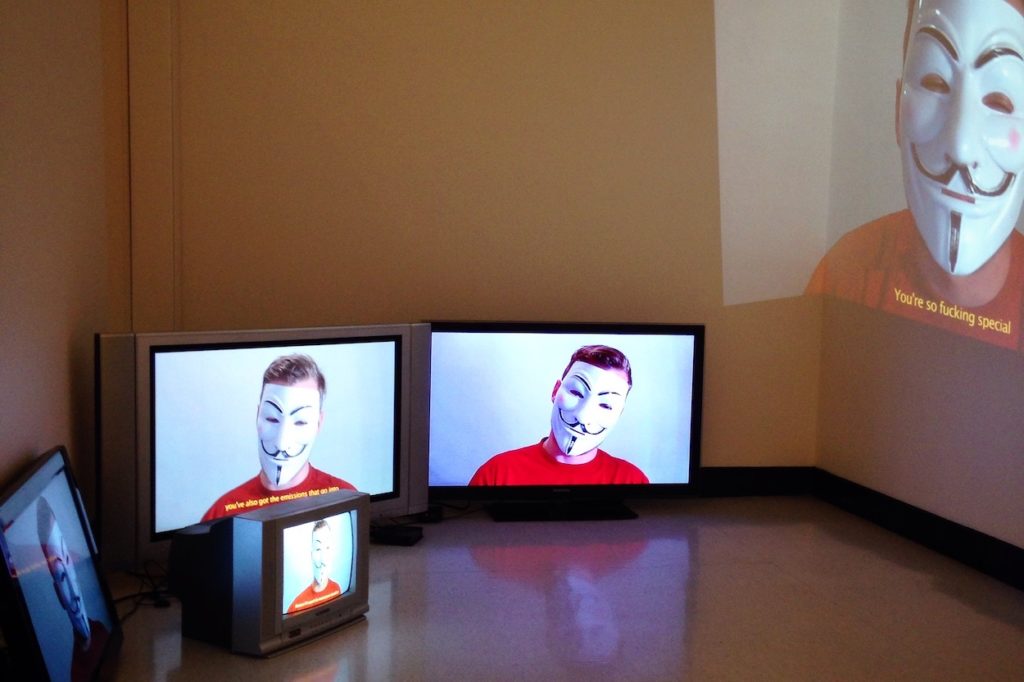 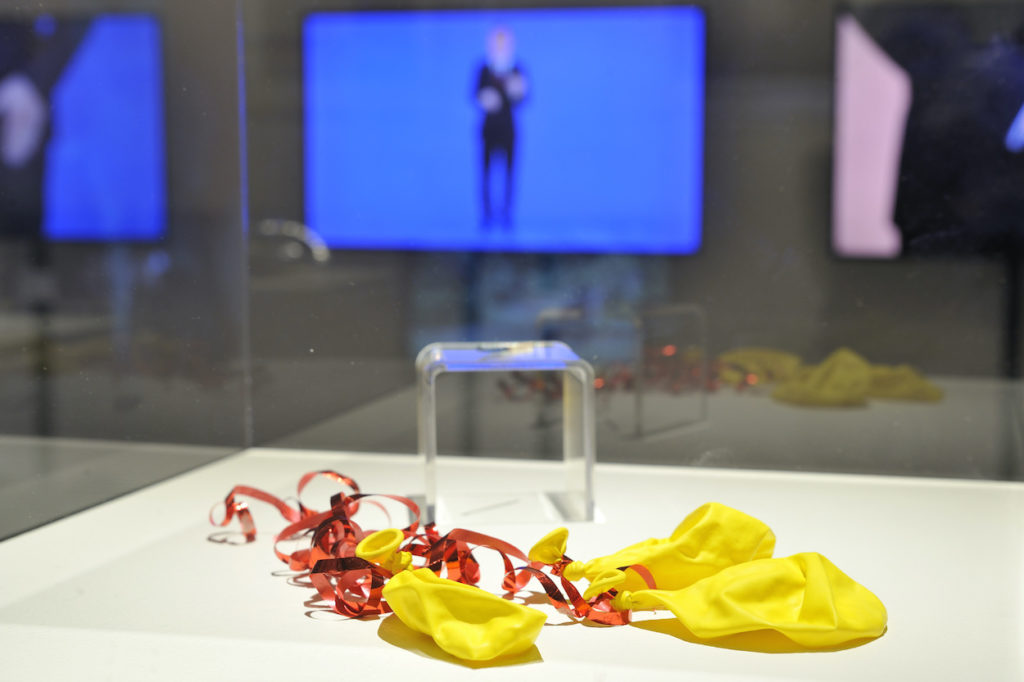 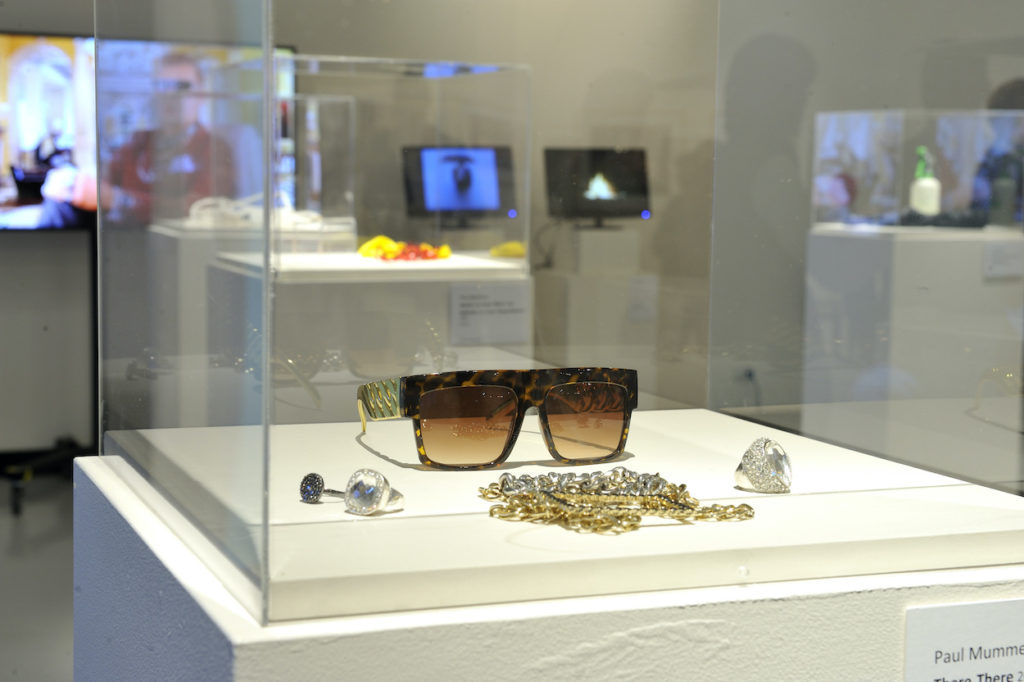 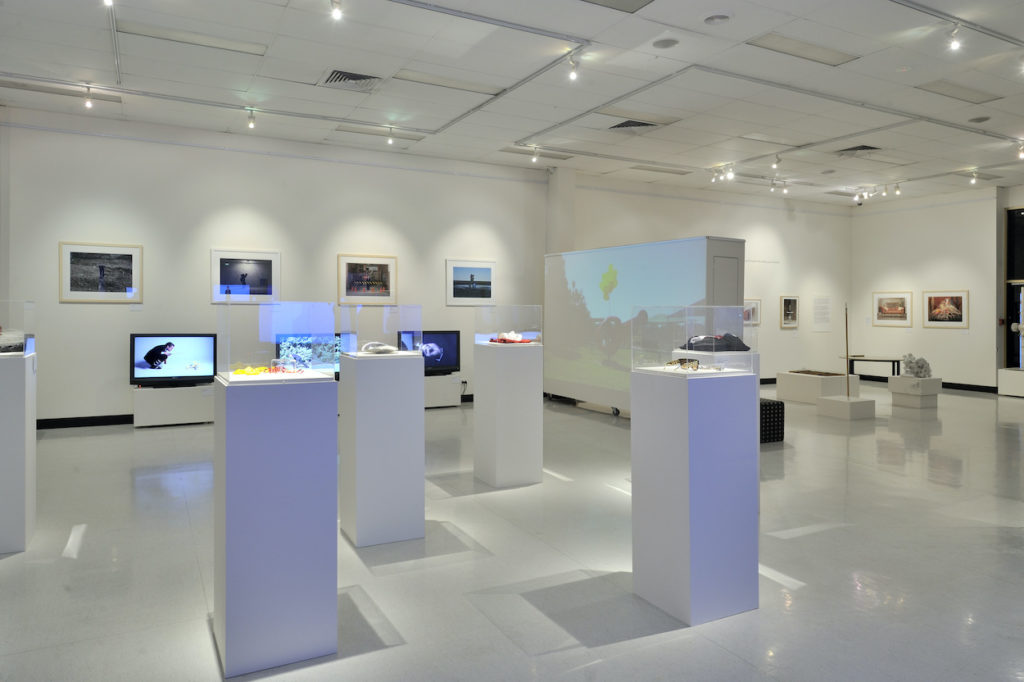 Selected works with a video introduction and assorted performance relics and vinyl cut quotes: “When you laugh into the void, the void laughs back” and “What makes good tragedy also makes good comedy”

Catalogue Essay By Adam Geczy below.

‘What me worry?’ is the famous exclamation of the symbol of MAD magazine’s mascot, Alfred E. Newman. Although his face had circulated before his debut on the magazine’s cover in 1954, he has come to be its permanent symbol, an icon to insouciance and mischievous nihilism. But what it means to care or to worry has changed substantially in the interim. Alfred’s uneven eyes with their vacant stare and his moronic leer have gazed over the Cold War, numerous catastrophic and unnecessary wars, the slow erosion of the dream of the welfare state, and the rise of ecological crisis, global capitalism and exponential over-population. In the ‘old days’ crisis was limited to hearsay and was relatively localised, and cataclysm was limited to religious retribution, which was a highly abstracted concept, and well out of human reach. The contemporary predicament is one of such magnitude and complexity that it eludes rational thought. And the question of whether it was avoidable or immanent to the human condition remains one that is very much open. In the ‘old days’ there was a sense that one person could do something: a revolutionary, a visionary king, a saint, a prophet, or a martyr. But today all of these are met with cynicism as myths or pipe dreams. We now even sneer at Obama’s first electoral slogan, ‘hope’ and we just reply, ‘nope’. So what do you so when so much is beyond us, and when so much matters that nothing matters? This is Paul Mumme’s conundrum.

The persistent nihilist is almost an oxymoron, summed up in Beckett’s line, ‘I can’t go on, I will go on’. The consistent nihilist is different: he just kills himself. But to be a nihilist and to go on living is to live out a contradiction that is at the very core of religious belief, namely to have faith in something in which there is no tangible proof, except in the existence of faith itself. It is a condition that suspects that it is driven by fear, and its consolation is to sneer at those naïve enough to hold on to groundless beliefs. But there is another option, which Mumme explores which is to play out the riddle of existential befuddlement through a series of aesthetic ploys and ruses that are humorous, ironic and almost always, inevitably, self-cancelling.

The dead-ends in his work, the titles as well as the works themselves—from holding an umbrella while in a pool of water to making a work discussing leaving the art world—are not to be categorised as just the actions of a lapsarian atheist (‘yes I am an atheist, but…’), it is much simpler than that. If one takes the terror of nihilism out of the equation that thunders at the tragedy of life, and vaunts the heroism of the ultimate agency of taking one’s own life, all one is left with his amusement: I may as well have fun. But Mumme’s work is not to be understood as merely amusing or blithely flippant. Rather it is a lengthy and sustained effort to create the impossible, which is a science of the flippant. This is much like Derrida’s ‘archaeology of the frivolous’: in his effort to find a serious and creditable concept of language and knowledge, the eighteenth century philosophe, Condillac discovered a multitude of superfluities and oddities that existed not in spite of, but for the sake of coherence and rigour. When Mumme in a Guy Fawkes mask mouths off aimlessly about ‘stuff’ it not only reveals how full of vacuous palaver our lives are, but also the degree to which it is scaffolded around all the perceived seriousness of our lives.

As with comedy, it comes hard: it is not easy to mouth off about nothing for an extended period, before one segues into something whose literal content is meaningful. Indeed it is the very idea of the shaping of meaninglessness that tends to shake the credibility of earnest meaning per se. For the absurdist ethos is to draw attention to the possibility that clear meaning, rational thought, utilitarianism, and so on—all that appears self-evident and justifiable—is just another form of meaninglessness wrapped up in sheep’s clothing.

It is here that we find not only the philosophical, but also the political message in Mumme’s work. One of the noticeable effects of globalisation and corporatization is to hedge toward models that can be rationalised, heavily larded with jargon such as ‘viability’ and ‘sustainability’. The effect is increasingly to discredit approaches and ideas that do not fit such models, with art primary among them. But maybe viability and sustainability as they are practiced today mask a much deeper lack of sustainability and non-viability, for certainly things are not getting better. The best thing for the moment is to watch this all unfold, and quietly chew the fat about not much at all.